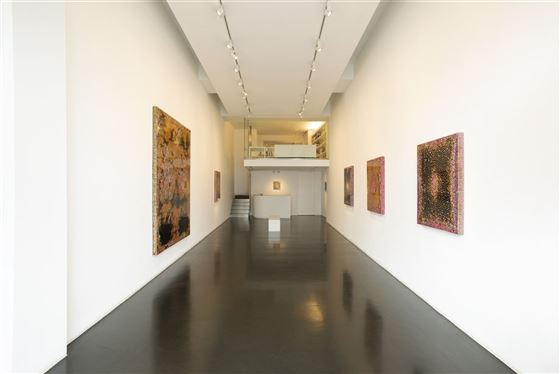 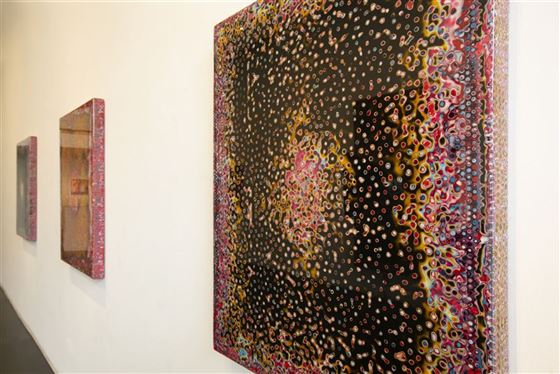 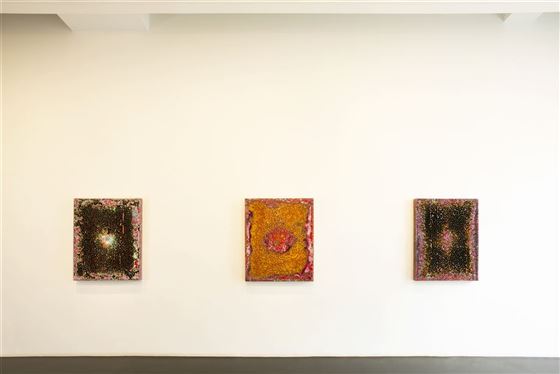 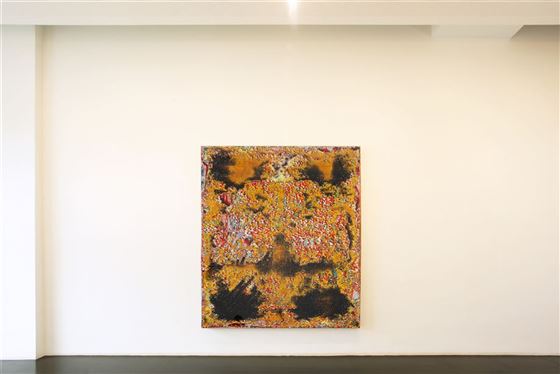 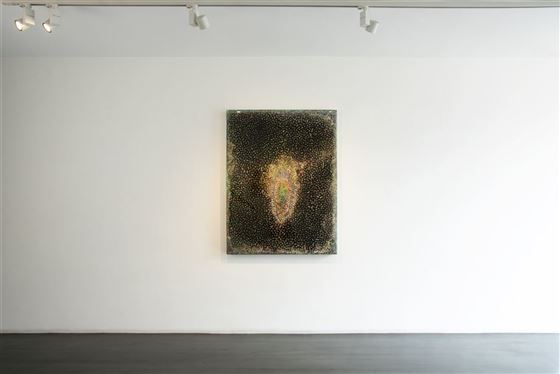 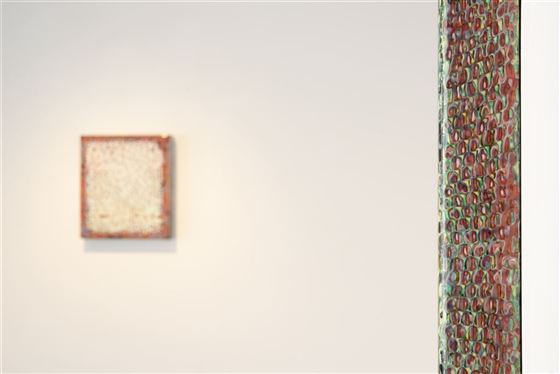 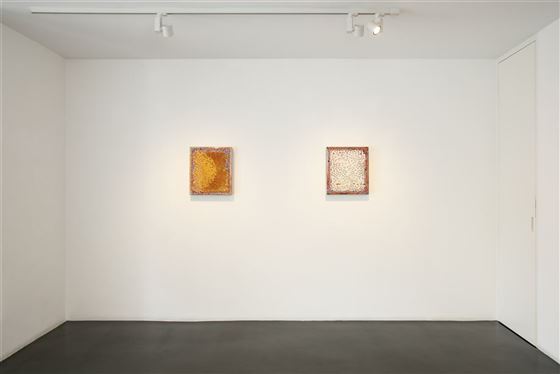 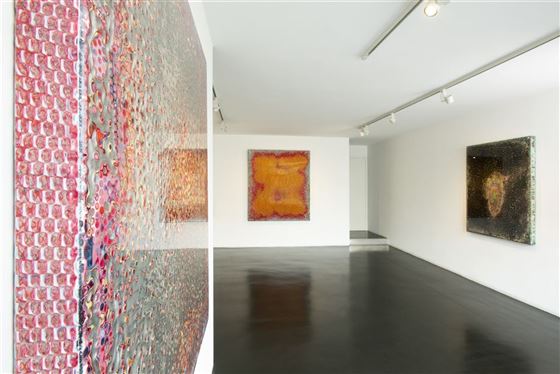 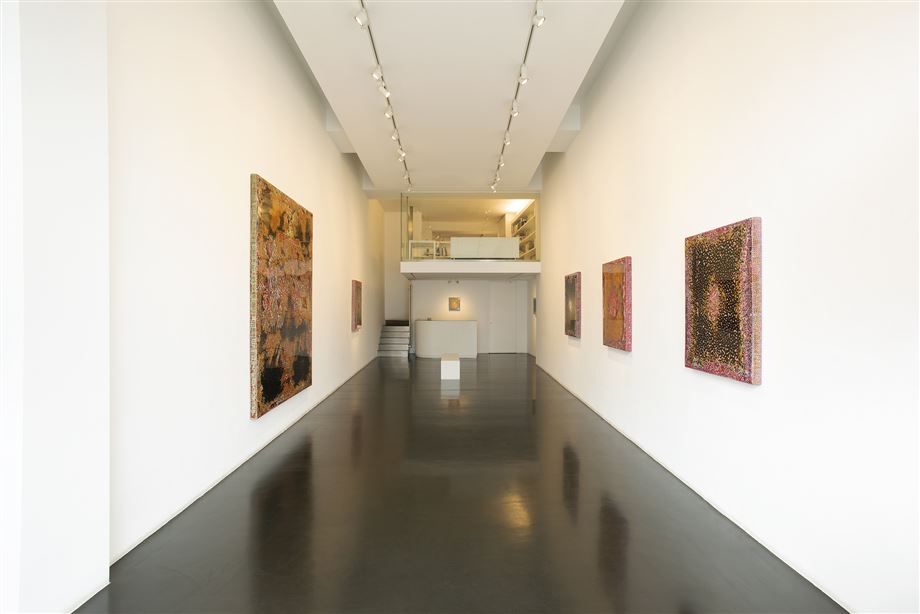 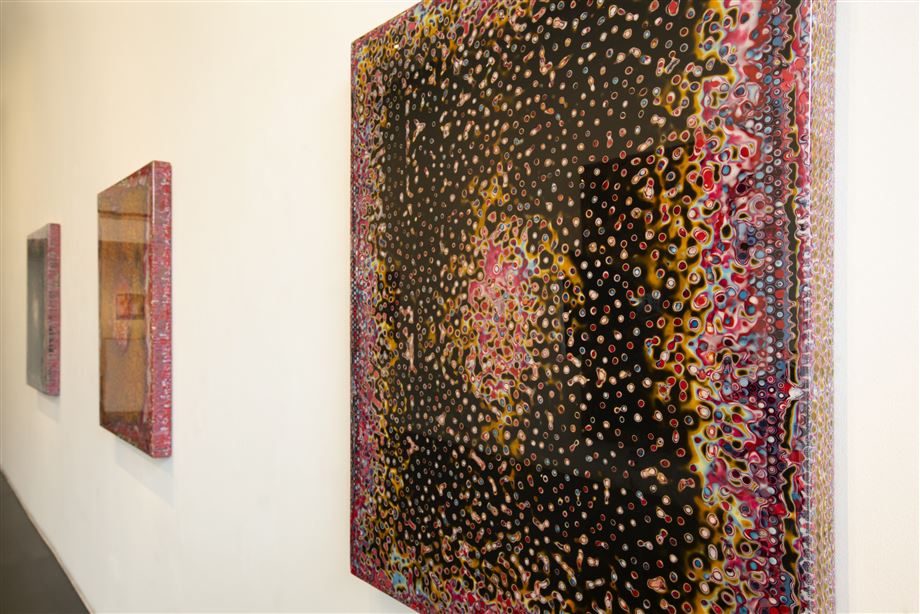 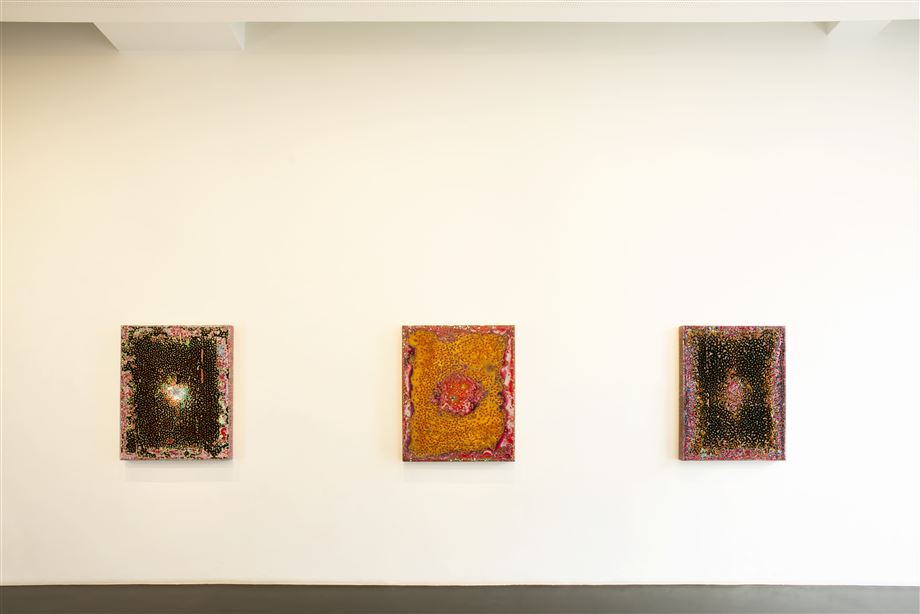 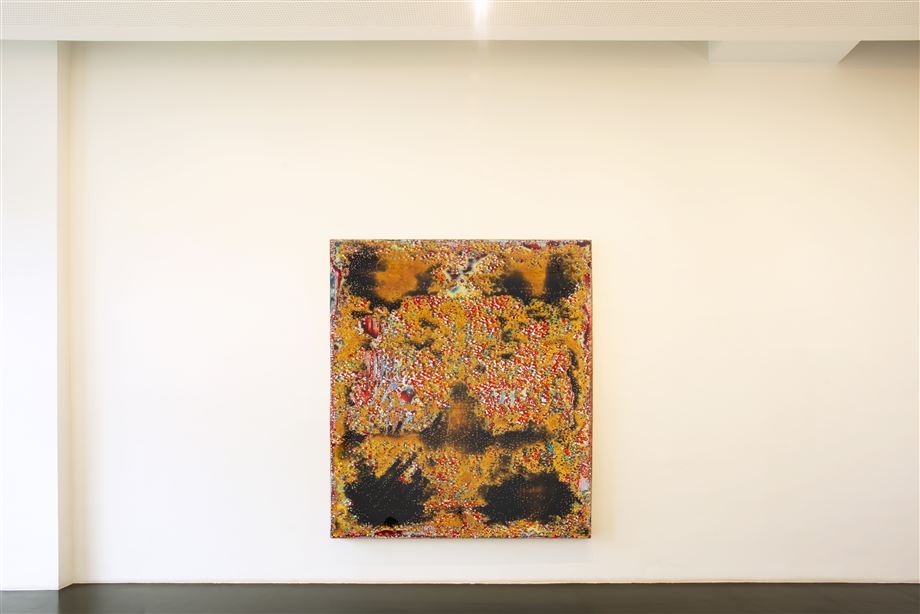 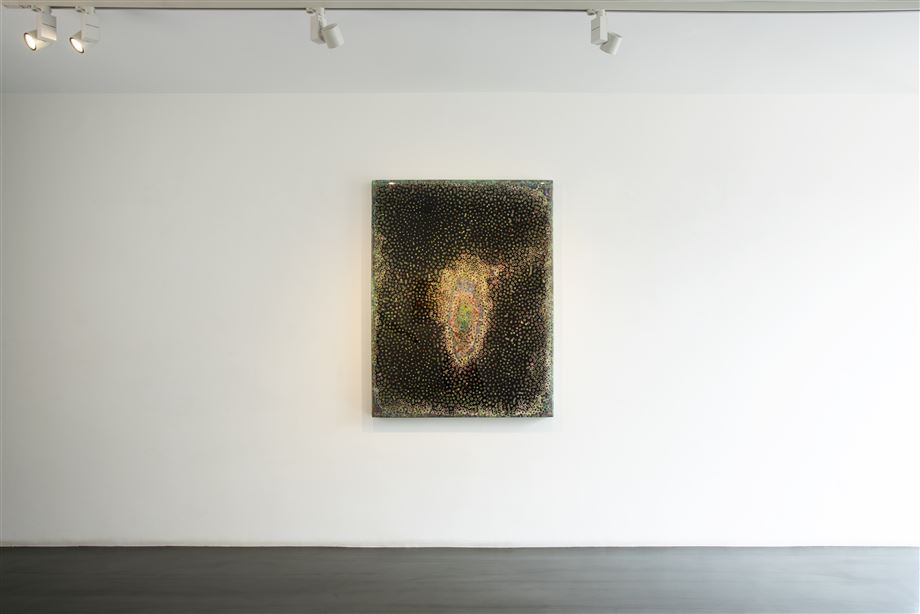 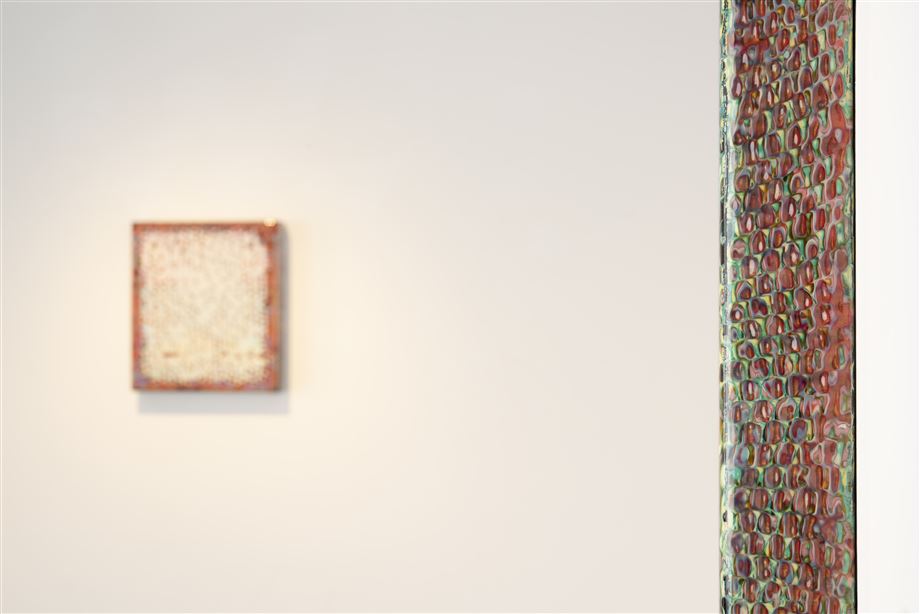 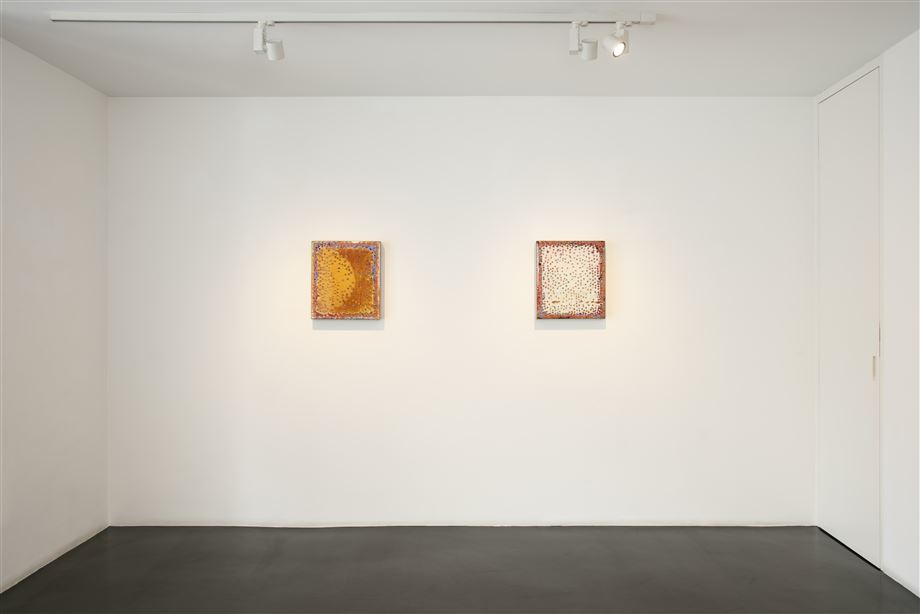 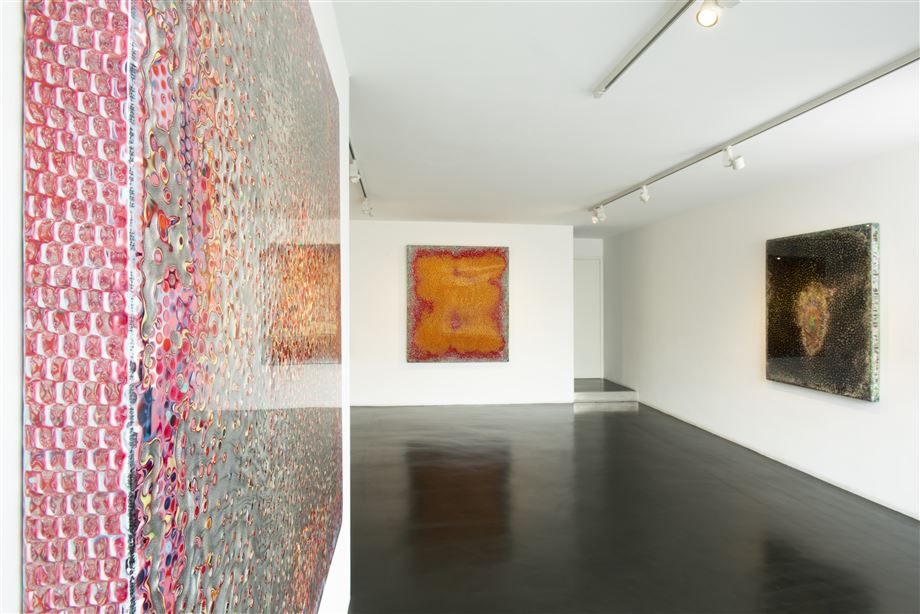 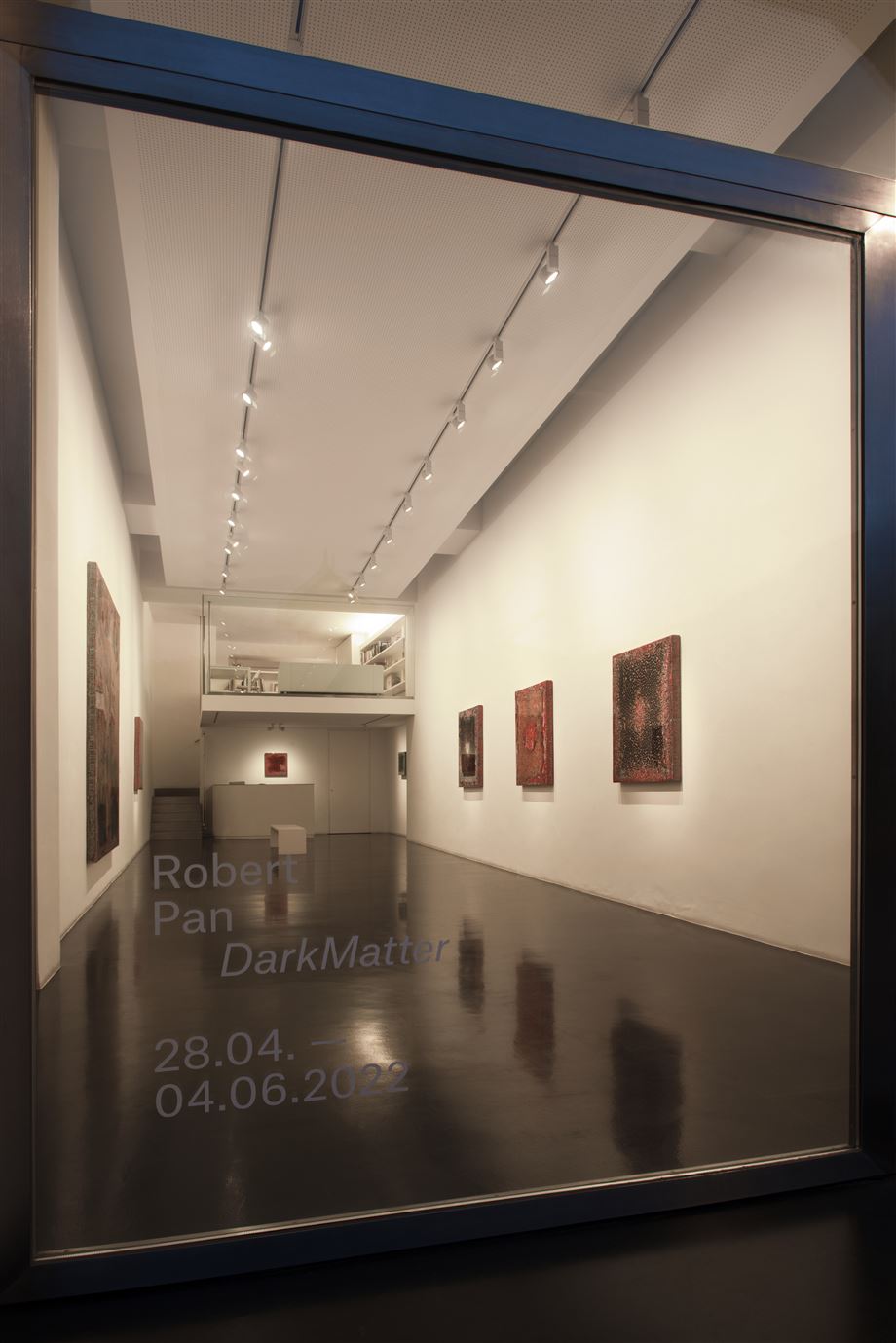 Commentators have often reached for scientific and cosmological metaphors when describing the art of Robert Pan. One need only think of the exhibition entitled Constellation at the Museion (2020). Indeed, his way of working brings to light memories of primordial times, the cosmic illumination of a sky that is only open to its own creation. Its abstraction is highly specific, it seems to belong neither to the paradigm of that abstraction which is called “lyrical” nor to the geometric. The resin dots appear like briefly shining points of light in the heavy impasto of the material from which they spring. It can be said that the polysemy in Robert Pan’s poetics, including the interlude of Josef Albers’ Homage to the Square in the exhibition Geometrie dell’infinito (Geometry of the Infinite), is one of the cornerstones of his strength. Indeed, in the context of what Umberto Eco has called the “epistemological metaphor” of art, several possibilities open up for the interpretation of these works, which possess not only their own chromatic vibration, but also the strength of a presence that affects the whole environment in which they can be seen. Which is why Pan’s works often need plenty of space with nothing or almost nothing around them. They have an effect on their surroundings even if they remain works of art on the wall; they have a magnetic force that focuses the gaze and the mental attention which are the preconditions of an artistic expressiveness that has always succeeded in harmonising painting and sculpture. In the latest series of works entitled DarkMatter, he resorts to the dark matter whose existence is theoretically assumed by physics and shifts mainly to discovery and revelation. By extracting matter from the indistinct substrate, he allows light to rise from the depths of dark, opaque matter. Scientists believe that the universe is permeated by this matter, which is so light-repellent that it turns out to be invisible. In a way, however, it also forms the energy reserve for that matter which we do however see and know. Its presence indicates that there is a close connection between the mechanisms of nature that regulate the infinitely small – the elementary particles – and the infinitely large and distant – that is to say, our universe. Even more interesting is the fact that this state of matter does not consist of solid and clearly defined objects, but of particles that have not yet been discovered. In any case, processes of aesthetic discovery and processes of nuclear physics seem to converge in an unusual way. Robert Pan with DarkMatter, shifts the terms of his research, discovers new aesthetic possibilities through his medium and proposes an extremely sophisticated and personal language in which painting merges with sculpture.