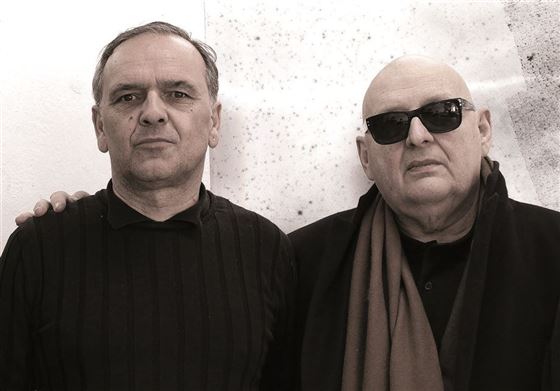 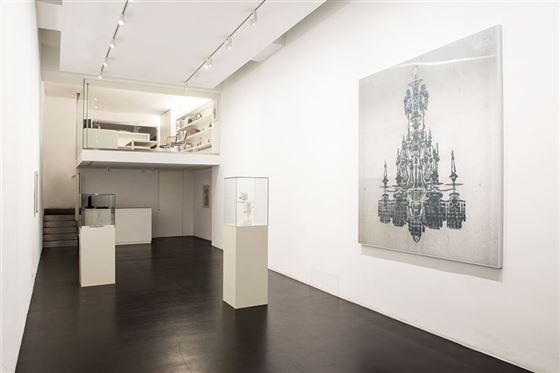 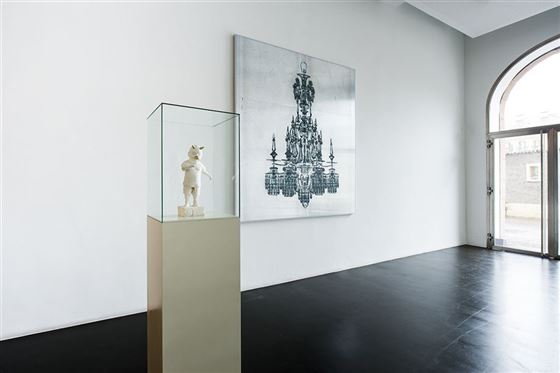 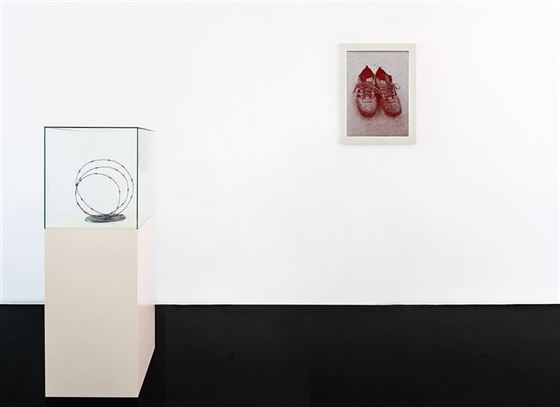 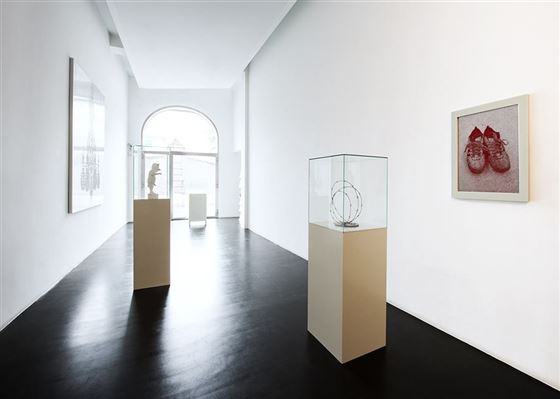 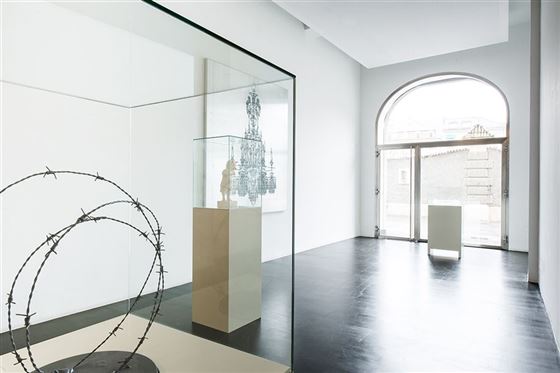 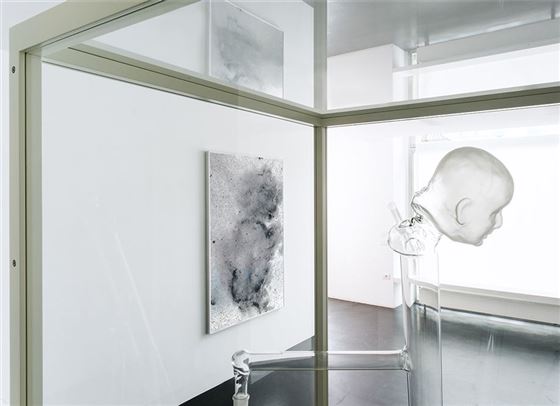 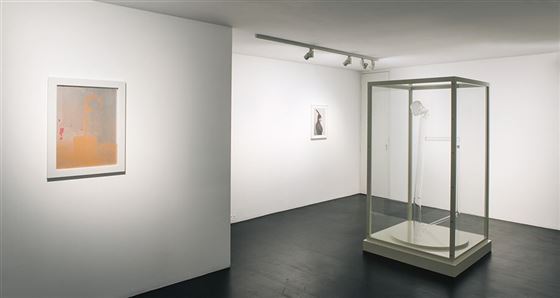 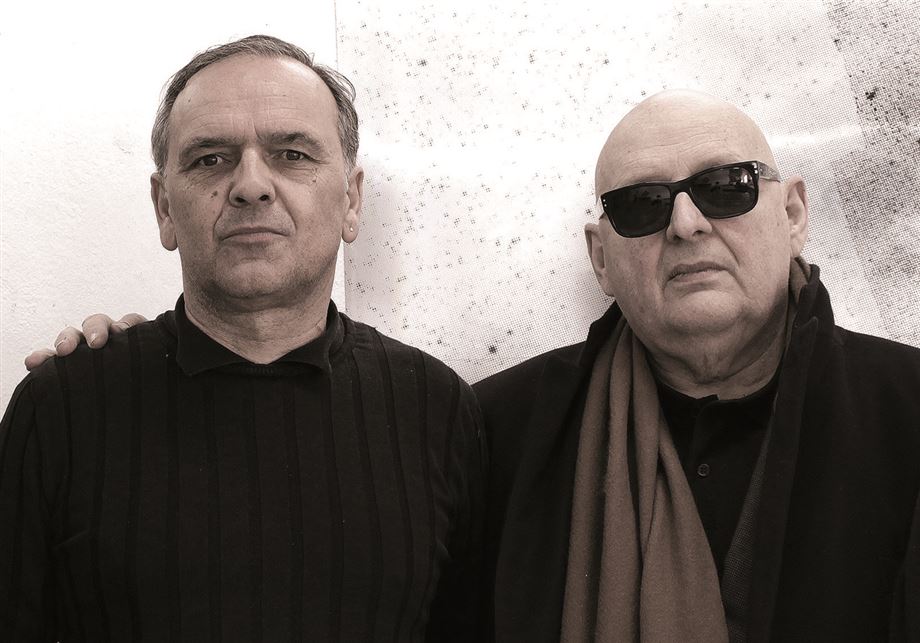 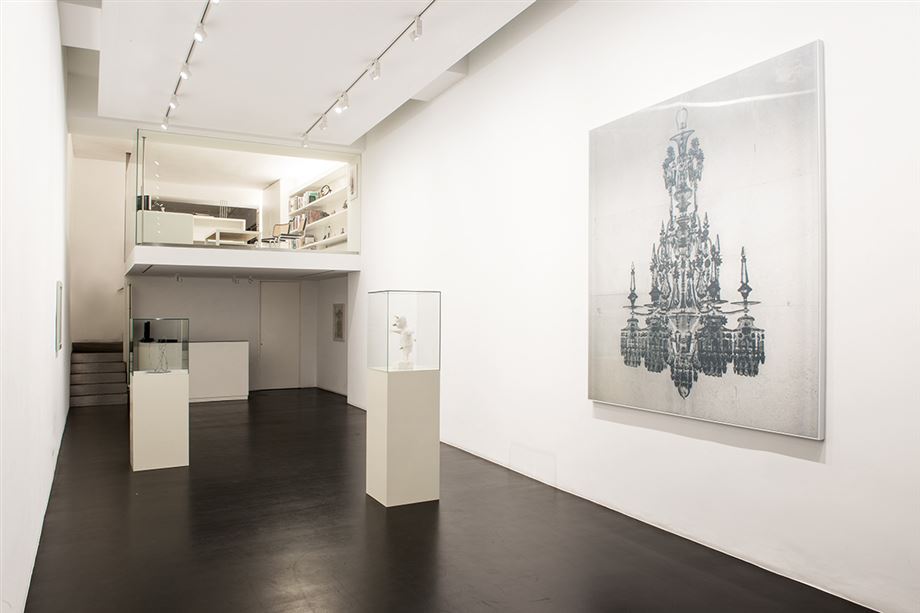 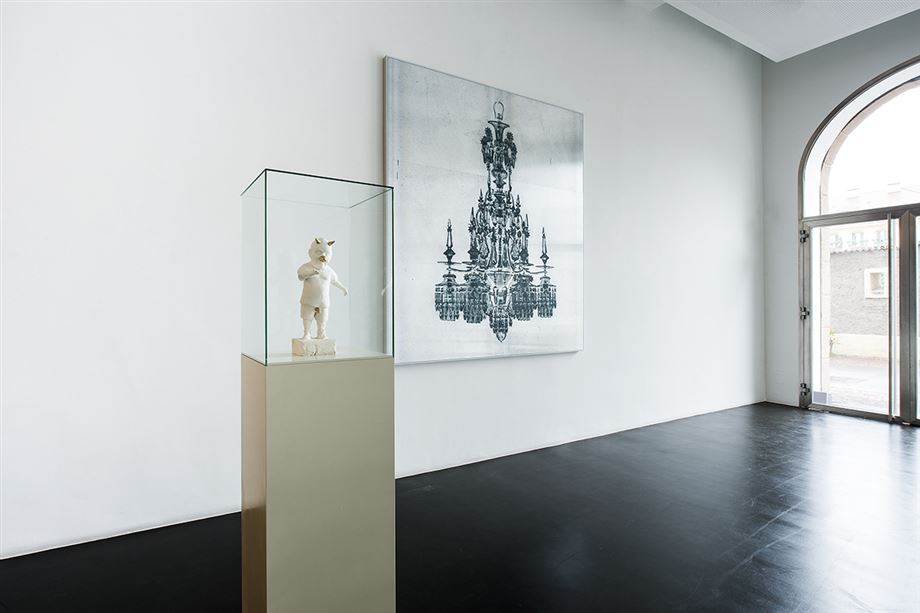 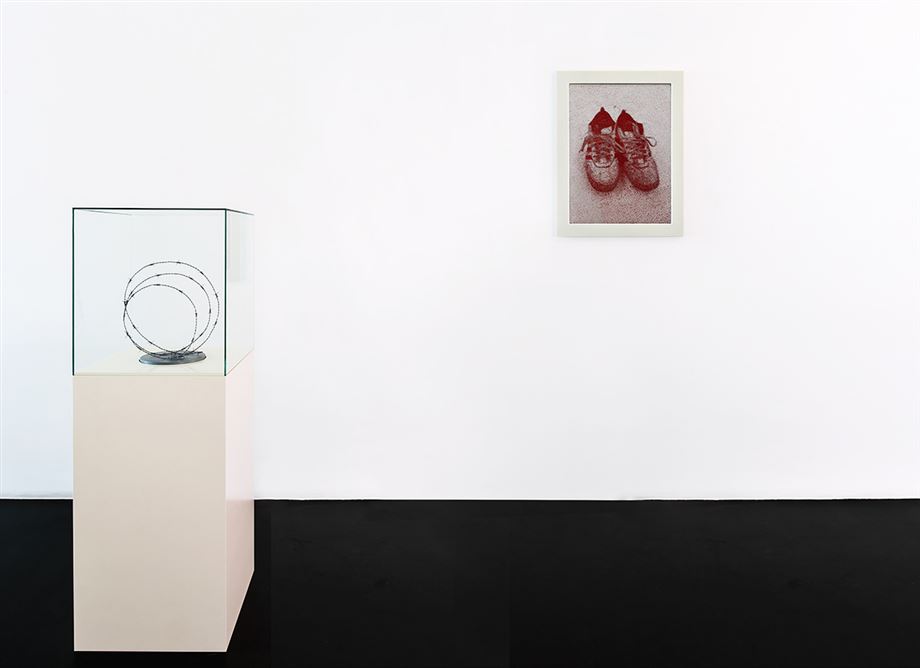 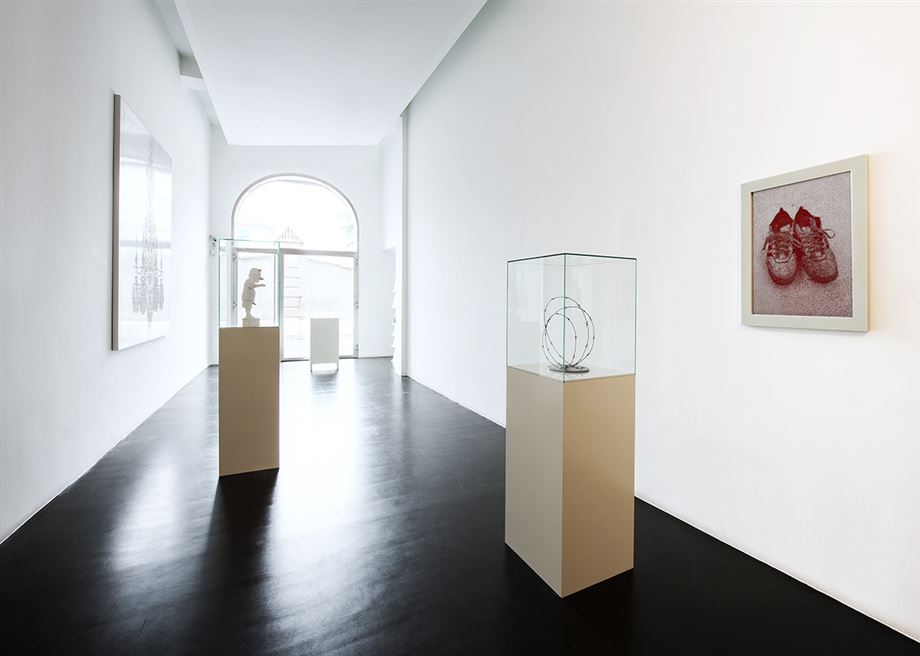 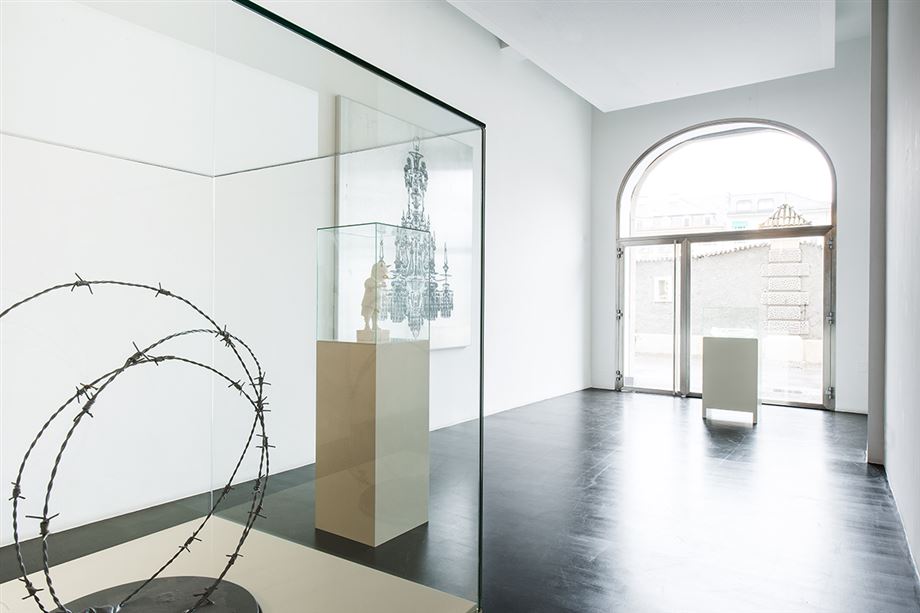 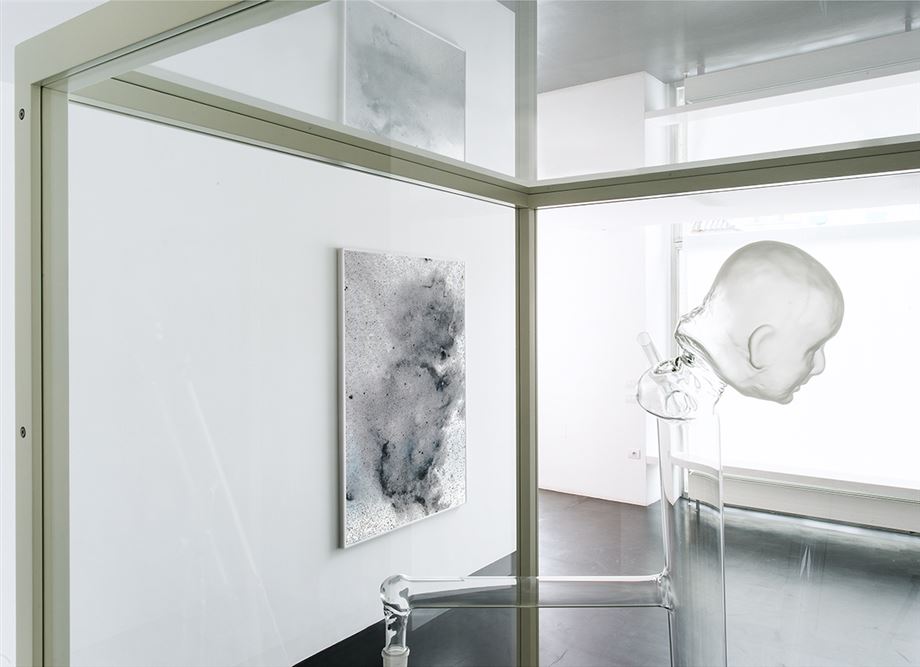 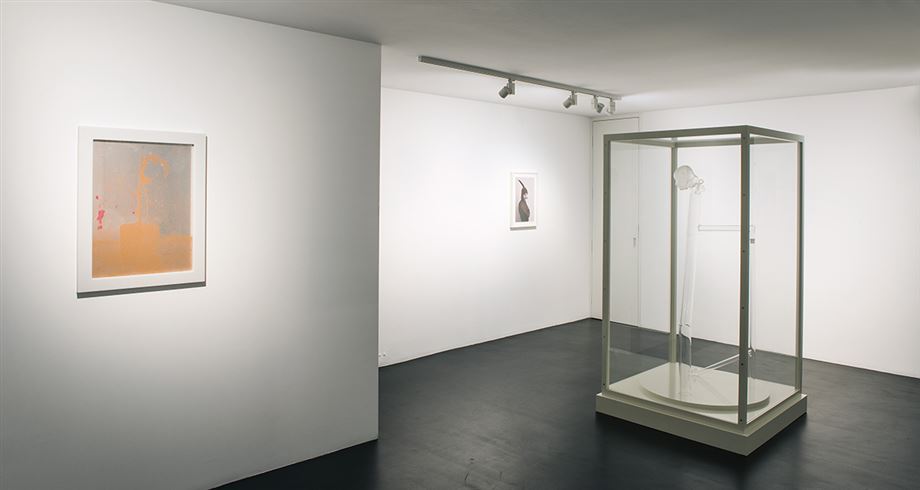 The Alessandro Casciaro Art Gallery is proud to announce the first exhibition of Urs Lüthi and Arnold Mario Dall’O in a site-specific project curated by the artists themselves.
The internationally recognized Swiss artist Urs Lüthi, will exhibit three sculptures, including a self-portrait from the cycle "Small Monuments" and two glass self-portraits from the series "Ex Voto". Arnold Mario Dall'O will present three new paintings made on aluminum supports.

In the cabinet of mirrors between art and life, Urs Lüthi began in the 60s and 70s to look for an idiosyncratic way of using himself to represent others and he did this by self-mockingly multiplying his own image. He used photography to generate pictures, assuming various guises, peculiar, comical figures, he re-enacted spectacles, changed gender, moved up and down the time-scale. The artist renounces the depiction of the outside world as objective fact and develops a strategy of reflection, with his own image becoming the place where the world is reflected and once more becomes reality. Urs Lüthi has not only changed the way photography is used, he has actually revolutionised the concept of art as well as that of performance within the performing arts. Urs Lüthi has chosen describes the dichotomy between irony and tragedy: life is too short for us to take it seriously. To represent himself as full of good humour, possessing a healthy dose of realism and avoiding any kind of drama, this is one of the hallmarks of the work of this Swiss artist. Sculpture slowly takes over from photography as the favourite medium of expression.
His sculpted self-portraits are not obsessive and repetitive, such as those by Roman Opalka, they are tragic and comical at the same time. They are shown to be as brittle as glass, but can also be as transparent as the mind. Ageing and dying are normal processes; life as an artist is definitely preferable to capitulation in the face of the banality of everyday existence.

Death is also without any doubt a distinguishing element that marks out the work of Arnold Dall’O. Dall’O has been striving to transform pictures of banal and commonplace subjects into something completely different.
First and foremost Arnold Dall’O devotes time to the production of these pictures which are culled from the net, because painting is a ponderous process, the digital photographs re-emerge with the painstaking absence of speed of a picture painted dot by dot, but unity is restored when viewed by the retina. At other times he will take a blow-up and makes us see reality through the Wolke or cloud or nuage of painting. Dall’O is working on figuration, without drawing firm outlines, wrapping his pictures in a “probalistic cloud”, if we may use this scientific term.
Arnold Dall’O’s idea of combining different categories of forms, from decorative patterns to pictures of the morgue, from symbols representing animals to starry landscapes, indicates that it is only the artist’s selection which matters. The cloud conceals, blurs the contours, but never fails to retain information, traces of a synchrony which disappears from the screens only to find a permanent home within the confines of the realm of art. It may well refer back to the idea of working with the mirror, of using the mirror image as a reflection – of the world – in both the literal and metaphorical sense. But whilst Lüthi takes the body and the face of the artist to express this role and function, Dall’O uses the screen to mirror a reality, moving everything into the foreground, allowing him to demonstrate a multiplicity of aspects to a never-ending series of visual events.


Urs Lüthi was born 1947 in Lucerne (Kriens) in Switzerland.
From 1963-1964 School of Applied Arts in Zurich. In 1964, he moved permanently to Zurich. From 1968 to 1971 he shared a studio with Davis Weiss. After an initial artistic phase in which he produced large-format conceptual pop art works and an existential crisis in the late 1960s, Urs Lüthi started to use with the performative photography, in which he consistently used himself both as used constantly ago by actor and conceptual model to create images related to his art and life. From 1991-2013, he taught at the Art Academy of Kassel.
Since the 1970s Urs Lüthi has held numerous solo exhibitions in very important galleries in Europe, for example:
Galerie Tanit in Munich, Galerie Stadler in Paris, Studio Marconi in Milan, Galerie Krinzinger in Innsbruck, Galerie Maximilian Krips in Cologne, Galerie Lelong in Zurich and Paris; and in international museums: Kunstverein and Städtische Galerie at the Lenbachhaus in Munich, Bonner Kunstverein in Bonn, Kunsthalle in Basel, Kunstmuseum in Bern, Maison de la Culture de Saint-Etienne, Kunstverein in St. Gallen, Kunstverein in Frankfurt, Swiss Institute in New York, Museo Nazionale di Arte Contemporanea in Bucharest, MACRO in Rome, Fondazione Brodbeck in Catania, Kunst Meran, Sammlung Falckenberg in Hamburg,  Musée Rath in Geneva. There were numerous contributions to group exhibitions in prestigious institutions such as the: Stedelijk Museum in Amsterdam, Kunsthaus in Zurich, Kunstmuseum Lucerne, Kunstmuseum Winterthur, Museum of Contemporary Art Chicago, Centre National d’Art et de Culture Georges Pompidou in Paris, Nationalgalerie and Neue Berliner Kunstverein in Berlin, Musée d’Art Contemporain de Lyon, Hong Kong Museum of Art, Palazzo Reale di Caserta, Hara Museum of Contemporary Art in Tokyo, Centre d’Art Contemporain in Ghent, Kunsthalle in Vienna, Tate Modern in London. Finally we should like to remind you of the participation by Urs Lüthi at : Trigon ’73, Graz (1973); 13th Biennale de São Paulo (1975); Documenta 6, Kassel (1977); Sidney Biennale (1978);II Internationale Fototriennale, Esslingen (1992); Biennale Seoul (1995); 49th Biennale di Venezia (2001).
Urs Lüthi lives and work in Munich.