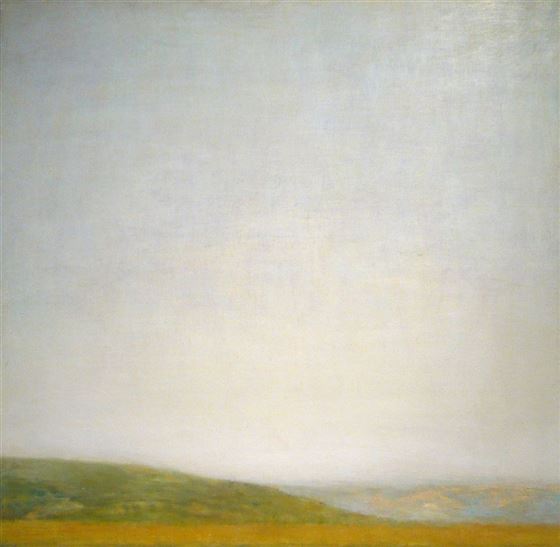 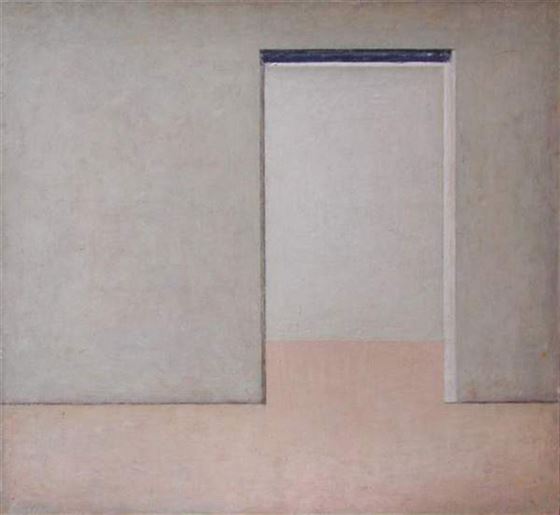 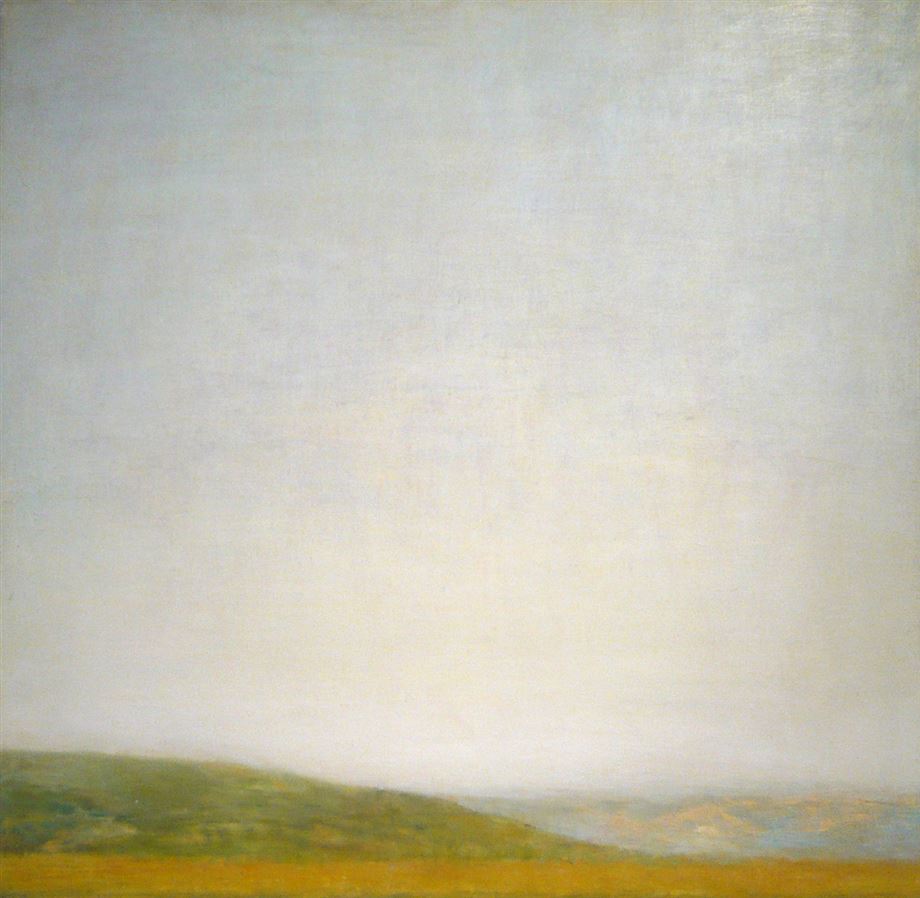 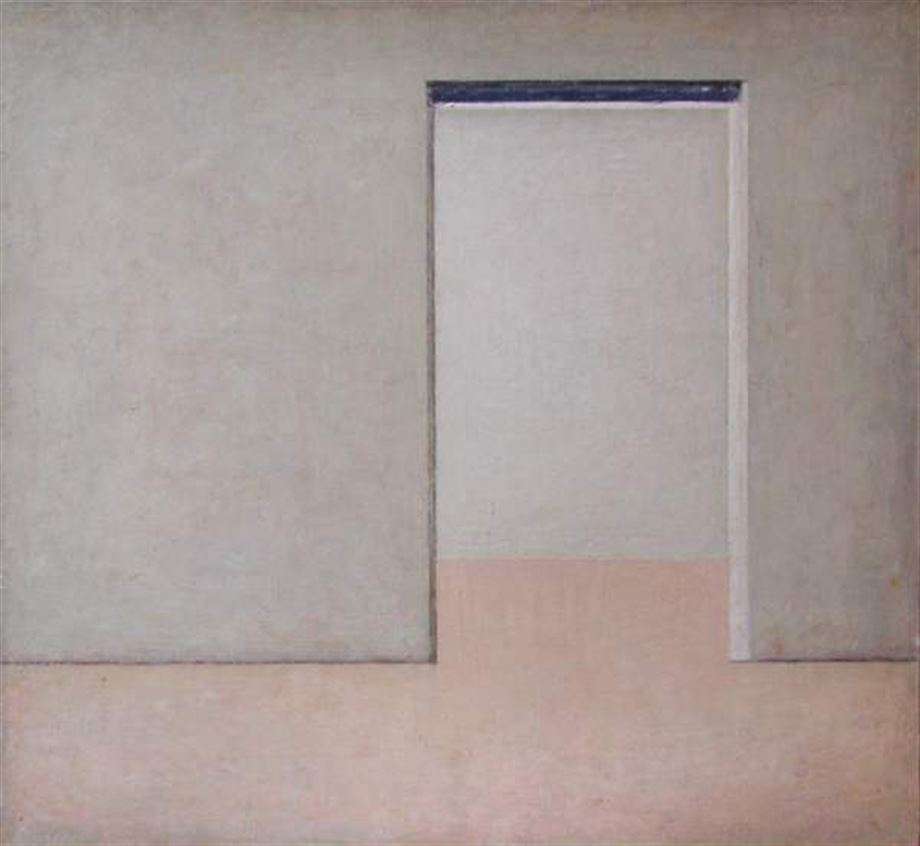 […] Bosisio resists overloading his pictures with content in favor of eidetic catharsis, within which iconographically readable contents are largely expunged. As countermove, he prepares the ground for a conceptual consolidation. And this now asserts sui generis the claim to “being the thing itself.” Which means: remote from any idealistically qualifying premises, form and color generate on the image medium as well as in the eye of the beholder a parallel world that, although still tied to representation, is conceived autonomously, in a process that eschews from the start any expressively performed exaggerations. Landscapes are reduced to a few planar surfaces. In order to ensure readability without any presuppositions, this type of attitude calls for a strict compositional order tending toward construction. Any kind of optical supremacy is undermined from the outset. In some cases, a single line drawn in opposition to the rest of the composition is sufficient to create compositional parity. The color schemes are likewise reduced to a few tones, their appearance muted and suffused, creating a sfumato that generates a pictorially self-reflexive, diffuse space within which the illusionistically motivated notion of figural movement is ruled out. The same can be said of the artist’s largest group of works, those depicting interior spaces. Here we see spartanically furnished rooms in which table, chair or bed and a few scattered objects are marshaled into a strict central perspective. But even here, the strikingly constructive composition derived from these elements is undermined by individual, sometimes indistinguishable, objects, and even more so by open doors and by the flat application of paint. In certain parts of the pictures the paint has apparently completely forgotten its accustomed commitment local coloration. The same goes for the use of shadow, which occasionally breaks free from the laws of illusion and in certain, often marginal, zones limns random-looking patches instead. The still lifes by contrast appeal to the eye with successively presented, informally splotchy formal solutions. What once were faithfully depicted objects – jugs, jars or plates holding fish – appear once again here as partially freeform and unbound painting, which nevertheless still has to assert itself against a clear and constructively determined pictorial composition. What counts most in this connection is the relationship between semiotically obliged form and an arrangement of colors that is first only partially and later more or less completely free. Representation and local texture, indeed the all-absorbing experience of light and shadow, make a painterly claim, asserted as a matter of principle, to conceptually re-establishing the genre of still life. There are conspicuously few figures in Robert Bosisio’s pictures. All the same, the ones that do appear bear witness, sometimes only as shadows, to a melancholy that permeates the work as a whole. While the interiors also allow us to draw conclusions about the presence of their inhabitants, they largely leave out the moment of active occupation of a space. On the contrary, a symptomatic reserve pervades throughout, fastening our gaze onto the rooms as a whole and onto the details therein, so to speak onto their surfaces. Since everything is equally present without any temporal gradations, these spaces not only elude the viewer, but also emphasize their constructive and dappled, painterly openness as the decisive, indeed the supreme, pictorial criterion. […]

Robert Bosisio was born in 1963 in Trodena (I). From 1983 to 1988 he studied painting at the Academy of Applied Arts in Vienna with Professors Unger and Frohner. He currently works between Trodena, Cluj-Napoca (RO) and Berlin (D). In 1995 he received the prize of the Walther von der Vogelweide Foundation in Munich (D) and the following year the Martin-Rainer of the Johann Wolfgang von Goethe Foundation in Basel (CH). Another award received is the "La Fenice" award in Venice (I).
Back to list / Prev / Next
/ /
Alessandro Casciaro
Art Gallery
Impressum
Privacy Policy